For starters, there are four different types of dental bridges and the way a dental bridge looks will depend on what type of bridge it is. While they may all look the same once placed in the mouth, all four types have subtle differences that are noticeable before they are permanently cemented into the mouth. 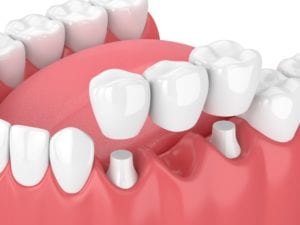 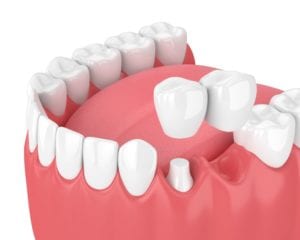 The second type of bridge, known as a Cantilever bridge, is a slight variation of the traditional dental bridge. While a traditional bridge uses a minimum of two dental crowns (one on either side), this type of bridge only uses a single dental crown. Since it is only supported by a single crown, cantilever bridges are generally only used with one pontic and are placed towards the back of the mouth. They lack the same strength as other types of dental bridges and are no longer very common.
Once traditional or cantilever bridges are placed, they will blend in with the surrounding smile because the pontics and supporting dental crowns will be fabricated to make the color, size, and contour of the surrounding teeth. However, because the crowns are only caps that fit over the teeth, the border between the crown and natural tooth may become visible if the gums recede.
The third type of dental bridge is known as a Maryland Bonded bridge. Unlike the aforementioned bridges that are supported by dental crowns, Maryland bonded bridges are supported by a metal framework and look like a row of teeth with metal clasps. In most cases, this metal framework sits behind the teeth and is barely noticeable when smiling. However, it may be visible from certain angles depending on its location. 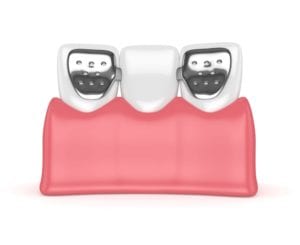 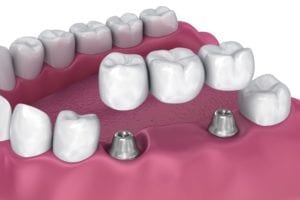 The fourth type of dental bridge is an implant-supported bridge. Implant-supported bridges are supported by dental implants, which are titanium screws placed in the jawbone. There is usually one implant-supported crown fused to either side of a bridge of pontics. This type of bridge can be used to restore multiple adjacent missing teeth. It has a natural appearance, and the implant screws themselves are below the gum line and cannot be seen.
As you can see, dental bridges can look different depending on the type of dental bridge. Although they all have a similar structure, there are slight variances in each type that can ultimately change its visual appearance. However, the variety also offers different options so you can find the best dental bridge for your smile. After all, even with all the famous bridges, the most important bridge in your life may someday be your dental bridge. 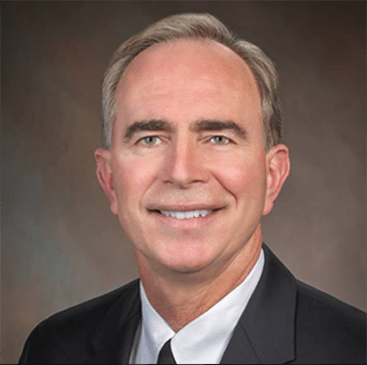 Dr. John Batlle attended the UF College of Dentistry where he received his Doctor of Dental Medicine degree in 1983. After graduating, he worked for the State of Florida and received his commission in the Navy Reserve Dental Corps. He was deployed to Guantanamo Bay, Cuba in 2002 where he served as the dentist for Detainee Operations and Navy Hospital GTMO. He recently retired from the  U.S. Navy Reserve after 26 years of service.

Font Resize
Contrast
Accessibility by WAH
Call Us Text Us